Engineering Explained: Exhaust Systems And How To Increase Performance

Engineering Explained: Exhaust Systems And How To Increase Performance

If you thought that a bigger exhaust system meant bigger power, you'd be mistaken. Here's everything you need to know about exhaust systems and how to increase performance

There’s nothing wrong with choosing an exhaust based on the way it sounds or looks, if of course your goal is to make it sound/look better. If your goal is to increase performance, however, it’s a different story. Let’s break this down into four sections :

1.What are the parts of an exhaust?

2.Why should an exhaust be upgraded?

3.Test results from upgrading a stock car’s exhaust: Is it worth it?

1. What Are The Parts Of An Exhaust?

This is the first point of contact for the exhaust gases after they exit the cylinder head. It’s also a commonly upgraded item where heavy cast manifolds are swapped out for tubular headers. The idea behind upgrading to an exhaust header typically comes down to increasing the exhaust piping diameter as well as increasing exhaust scavenging by aligning the exhaust pulses in a favorable fashion.

This is the device which allows you to still breathe the air while you’re visiting Los Angeles. It takes the incoming NOx, CO, and unburnt hydrocarbons from the exhaust and “converts” it into much less harmful N2, O2, CO2, and H2O.

It’s ideal not to have your exhaust gases pump directly underneath your car, filling your cabin with fumes. You’ll need some pipes to route the air elsewhere.

Though it’s not a necessary portion of an exhaust, it’s often included as it helps to eliminate noise. Resonators work by rejecting sound waves and canceling each other out, and they’re typically tuned for a specific frequency in which the engine noise is loud or undesirable.

There are many types of mufflers, but the goal is pretty much the same: eliminate noise. One of the most common ways they work is by redirecting the airflow. Along the way, the exhaust passes through porous pipes which allow the exhaust gases to expand into sound deadening material, minimizing the noise that finally exits the tailpipe. 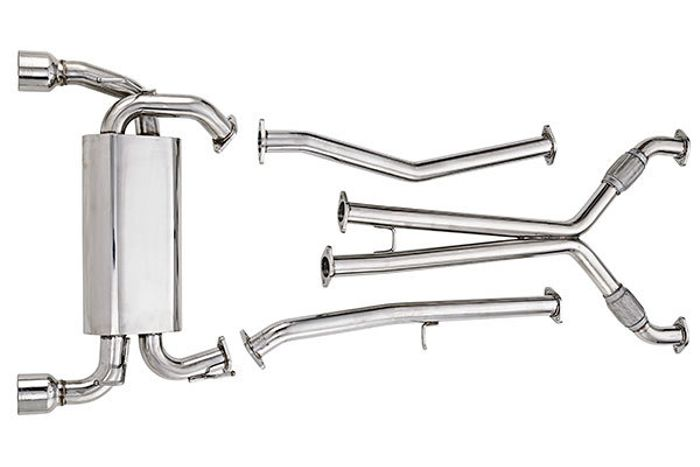 2. Why Should An Exhaust Be Upgraded?

When I looked into upgrading the exhaust on my car, my original goal was simply to see if it made any difference. Would performance increase or decrease? It’s important to understand that the velocity at which your exhaust exits is one of the key elements to its performance. When your engine is at low RPM, the amount of exhaust gases leaving is low, so the velocity it exits the exhaust is low. You can increase this velocity by using a smaller pipe, but this will create a restriction for higher RPM.

Exhaust scavenging makes an exhaust system more efficient because as your exhaust gases pulse out of the engine (from each exhaust stroke of the engine), you have a high pressure area leading the exhaust pulse, followed by a low pressure area (with a transition). This low pressure area helps to pull the next exhaust pulse out, meaning the piston has less work to do when it’s forcing out the exhaust gases. Ultimately the goal is to have the fastest exhaust velocity with the least amount of restriction (which of course isn’t as simple as writing that sentence).

The whole idea is to increase your exhaust diameter as the amount of exhaust your engine creates increases. This reduces restriction and allows for more flow. If you have modified your engine, you’ll need to modify the exhaust as well to allow for more airflow.

For my ‘99 Integra, I installed a cat-back exhaust with an inner diameter of 2.25-inches versus the stock exhaust which had an inner diameter of 1.8-inches. This is the only modification that was on the car for the testing. The results are somewhat predictable, but certainly interesting to learn from. For my testing I ran three acceleration runs in each of 1st, 2nd, and 3rd gear, with both the stock and aftermarket exhaust. I took the average of each of the three run times, shown below:

What you can see is that the stock exhaust was ideal for the lower RPM range (0.73 per cent faster), while the cat-back exhaust performed better once you’re into the higher RPM range (3.09 per cent faster). Further breaking down the data I had, it revealed the cat-back performed best in the 5000-6000 RPM range. For a full explanation of the test results, check out the video below:

So, why should you upgrade, or not upgrade your exhaust, assuming you’ll achieve similar results?

If you’re starting with a car that’s completely stock, and this car is your daily driver, you’re going to get better performance on the low end with the stock exhaust, and this will likely be the RPM range you stay in for the majority of driving.

If this is a dedicated car for spirited driving, it can make sense, even in the case of a stock car, to upgrade the exhaust. If you’re keeping the engine within the higher RPM range while driving (such as on a track), you’ll benefit from the lack of restriction the larger exhaust provides. That said, you’ll find the exhaust much more meaningful if you actually upgrade the engine performance.

*Heat is energy. If you need the energy of the heat to power something in a car (for example, a turbocharger), it makes sense that you want to keep as much of that heat as possible. This is one of the reasons why you’ll see heat-wrapping in motorsport with forced induction. It’s also a reason why Mercedes kept its exhaust system very small in its Formula 1 car, as it gives it less time to lose heat (and saves weight). An exposed exhaust radiates heat, and this is energy that otherwise could be harvested. In other words, Alex’s Miata resembles one of the greatest pieces of technology in motorsport.

*Heat is bad for your intake. If your engine bay is super hot, your intake temperatures will increase. You’ve all heard the story - less dense air means less oxygen and less power. Heat-wrapping the exhaust in some cases can reduce the engine bay temperature, and reject more of that heat out of the exhaust pipe instead.

*As the exhaust cools it slows down. Keeping the exhaust temperatures high keeps the velocity high, and this improves exhaust scavenging.

When it comes to exhausts, and modifying your car in general, that’s really the point, isn’t it? You can do all the math, design it with the best intentions, but ultimately you need to test it out to determine what the real world performance gains are.