What makes one vehicle louder than another? How are cars able to reduce emissions? The answer is simple, because of the exhaust system. The exhaust system works through several components that collect exhaust fumes from the engine cylinders and removes harmful substances while reducing noises and releasing exhaust gases away from the vehicle.

All exhaust systems produce six gases as emissions, three of which are toxic, including carbon monoxide, nitrogen oxide, and nitrogen monoxide. While the main task of the exhaust system is to dissipate harmful gases produced by the engine’s combustion chamber, it is also tasked with muffling the sound. A vehicle with a poor exhaust system will exhibit issues such as lower fuel efficiency, rumbling noises from the exhaust pipe or muffler, dangerous gases, and may emit a rotten egg smell.

The exhaust system is made up of several components that work together to reduce exhaust noise and provide a conduit for exhaust gases to exit the engine by making their way out beneath the vehicle. This pathway is used to keep harmful gases from entering the vehicle and making occupants sick. In many cases, the exhaust system will make the expelled fumes cleaner in an effort to reduce emissions and protect the environment from further damage. Some components include a series of pipes, clamps, hangers, and sensors. However, in every vehicle you’ll find these components that make up the exhaust system:

Exhaust Manifold – Collects exhaust gases from each cylinder from the combustion chamber of the engine and directs them into the exhaust pipe. Usually made of cast iron or steel with special bends to increase efficiency.

Catalytic Converter – or “cat” as many refer to it. What it does is in the name. It uses a catalyst, or substance such as platinum, palladium, rhodium, or a chemical that makes other chemicals react without changing its own makeup. It converts the harmful emissions from the engine’s combustion chamber into water vapor and carbon dioxide. Oxidation converts carbon monoxide into carbon dioxide and hydrocarbons into carbon dioxides and water. Although these gases are still harmful to the atmosphere, they are less detrimental than gases produced by the engine. These components typically last for about 100,000 miles but commonly fail due to an exhaust leak, unburned fuel, engine misfire, or external damage. When the cat begins to fail, you may notice a rotten egg smell and the check engine light will activate. Unfortunately, replacing this cat can get expensive due to its make-up of precious metals as cerium, platinum, rhodium, or manganese. 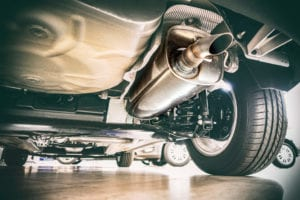 Muffler – Also named for what it does, the muffler reduces or muffles sound that is produced by the engine while maximizing exhaust gas flow. Better flow rate translates to better performance in all functions of the car. However, even a tiny hole in the muffler can affect its ability to muffle the sound or its efficiency of flow rate.

Resonator – Similar to the muffler, this component changes the sound vibrations from the engine and can be placed either before or after the muffler in the exhaust system. The main task of the resonator is to organize and tune vibration sounds but also plays a big role in improving exhaust flow effectiveness. Just like a well-designed, functioning muffler, this can lead to better performance and fuel efficiency.

Tail Pipe – As the last piece of the exhaust system, the tailpipe comes out of the muffler and extends past the rear bumper of most vehicles, directing exhaust gases out and away. On many modern-day cars, it also serves as a decorative feature and may be dipped in chrome.

Next time you’re driving down the road and a quiet car sneaks up behind you, you’ll know it’s a well-tuned exhaust system doing its job! On the contrary, if you can hear a noisy car or worse, that noisy car is yours, it’s probably time that the vehicle is inspected by a trained technician. Vehicles with poor exhaust systems may exhibit an illuminated check engine light, bad smells coming from the vehicle, or poor fuel economy.

Sun Devil Auto’s ASE Certified Technicians possess the knowledge necessary to diagnose and repair all aspects of cars, trucks, and SUVs including, exhaust systems. You’ll be impressed with the level of quality, customer service, and workmanship found only at Sun Devil Auto. Plus, we guarantee all work in writing, offer same day service (in most cases), and provide free towing with major repairs! With our many locations throughout the Phoenix-Metro area providing comprehensive services, there’s always a Sun Devil Auto near you!